I have two main camps. For long stays and road access, the Kodiak Canvas with a cot get the call. If I need to be in the back country it all pack gear on my back and where ever I stop is home. My camps are simple and fast.

Any good chitter suggestions so I can actually get my wife to go?

I operated out of a canvas wall tent in the ADKs for 12 seasons, canoe in, during that time I burned through a lot of “helpers”, paddling all the gear in and out during snow storms and all sorts of inclement weather was a task. I used to pick a dead calm morning to go in usually end of September, like in this pic.

I had a few different spots I used for my tents, I have 2 Davis brand tents, a 10x12 and 14x16, depending on location and the number of hunters dictated which tent.

And then when season is almost over and you wake up to this, removal definitely becomes a challenge.

It was a lot of fun and I don’t regret doing it but to be honest it never paid off for me in terms of deer hunting success, I have better luck being more mobile and closer to my truck in recent years, I have since bought a small camp that I can drive to and it sure does make life easier and require less help, I have all summer to get camp in order and ready for season, I can focus more on hunting when season hits.

I have a kodiak canvas. Flex bow. During summer time we take it family camping with stand up ac. Campsite with plug.

But hunting I take a buddy heater or a small electrical stand up heater will work as well.

I also got a 5x8 enclosed trailer but if for pulling all the stuff with tents. The cots and hunting equipment and stuff to cook.

Truck camp when moving often. Canvas covering when stationary....and a Davis Wall tent with a fire stove when we are somewhere cold.

Cant get them turned but it’s simple. I’m planning on adding a early season hammock set up this year

I just man up and cuddle with my hunting buddies under the stars.....

A couple of my rigs

Jtaylor said:
View attachment 44583
I can stay at one of these a lot of times before I reach the cost of a camper or converted trailer, etc. Not as cool but oh well. If I'm out in the sticks, I'll just tent camp.
Click to expand...

And free smoke treatment on all your clothes!

gcr0003 said:
And free smoke treatment on all your clothes!
Click to expand...

Ya gotta make sure ALL your clothes are treated with permethrin too for the bed bugs.
R

Nutterbuster said:
Truck bed camping is pretty much like sleeping in the back of an SUV, and I've spent way too much time doing that. It works and for me was super cheap since my first car was a gmc suburban, but it has major drawbacks.

First is that you're sacrificing space for hauling clothes, weapons, coolers, and other gear because you need about a 2.5×6 foot area to lay down. That's half of your space or better just gone. Even sleeping on a cot or building a platform so you can store stuff under you only gets you so much because at most you can have a foot of vertical space without mashing yourself into the roof.

2nd is that it's a pain and a half to have to get dressed and cook/eat if the weather is less than pristine. Crawling into the back of a truck when it's raining and cold to try and shed wet clothes and muddy boots in the area you're sleeping sucks the first night and REALLY sucks the 2nd night.

Like I said, I've done it a lot. It works good for quick hunts and overnight scouting trips when the weather is nice. But I got to the point where instead of setting up the rear for sleeping I just leaned the seat back. If you've got money for a camper shell you've got the money to buy a canopy tent and actually be comfortable, and it takes all of 5 minutes to set that up solo. Me and a buddy can both sleep comfortable on cots with some 3" thick memory foam pads, and in the morning we can stand up, stretch, and get dressed and have breakfast even if it's pouring rain. If we've got electricity i have a heater, a box fan or two, a boot dryer, and a cord to charge phones and other goodies.
Click to expand...

What kind of canopy tent are you talking about?

Sent from my E6910 using Tapatalk

I put together a new camping kit for the 2021 moose hunt. We hunt about 10 km (6 miles for you folks south of the border) in the back country, but there are tight logging/atv tracks so we hauled in all the gear using an ATV and a small trailer for a long weekend hunting/scouting trip. Also use the tent for the moose gun hunt (9 days) since we rent a small island, but the cabin is tiny so won't hold all the guys.

The tent is a Cabela's Instinct Alaskan Guide 6-person model. It's a two person for two hunters with gear. Gotta love the optimistic rankings the tent companies use....6 person? Maybe if you all sleep in the same bag, and that ain't happenin'. LOL The tent is a 4 season, so works well in cold weather or if we get an unexpected snow storm late in the fall. Since all mesh windows/doors have full zip covers, it holds heat well. Got a small Mr Buddy tent heater for the colder weather, but never had to use it this year. To maximize space in the tent for gear and when the weather sucks, I got a Disc-O-Bed cot unit....bunk bed cots. Works great.....got the XL version so lots of space to stretch out for two guys. Not something you would pack in at around 70lbs for the bunk, but if you haul in, highly recommended!

Next year, I plan to haul in by ATV and camp for a week for the whole archery moose hunting week along with using the tent/cots for the 8 day gun hunt later the same month.

Here's a few pics of the tent and how we hauled in, and the view from where we set up

Here is some more info on the Disc-O-Bed bunk-bed cot system I use. Sold my large Cabelas cot as a result of getting these. 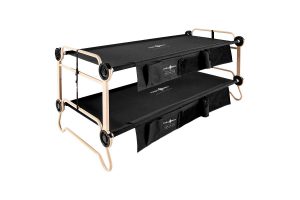 They are very versatile....you can stack 'em, just use one cot or use two cots side by each. They come with really nice carry cases and are easy to put up. Takes me about 10-15 minutes to set up the full stacked system, taking my time. Very stable and comfortable. But as I mentioned, way too heavy to pack in if you are doing a backpack hunt. But awesome if you can haul in.

These cots are supposedly used by the military and relief organizations, and having used them this past hunting season, I can see why.

I actually bought mine from Costco.....the XL model was cheaper there than anywhere else, including Amazon, and came with some extras thrown in at no charge (foot pads and extensions that raise the top bunk to give the guy on the bottom more headroom).

Getting that time off year again wanted to revive my previous thread and see what you guys setups are for This year. I travel for work a lot now so really looking into a good diy idea setup that I can fit in my truck when I’m on the road.
A

Are you looking for a "backpack-able" setup, or a just truck setup? I built mine on the premise of being able to backpack it and only worry about one setup.

My setup is mostly for the 9 day rifle season here in Wisconsin. A hub style tent, two cots with a memory foam topper, big Mr. Buddy heater, camp stove with propane to last the 9 days. For a one man setup its hard to beat a hub style tent with a nice cot, everything is quick up and quick to tear down.

This what I take most of the time, but I have slept in the back of the truck quite a bit with an air mattress, or if we're packing in, either the Eureka tent or a tarp, but it depends on the weather too.