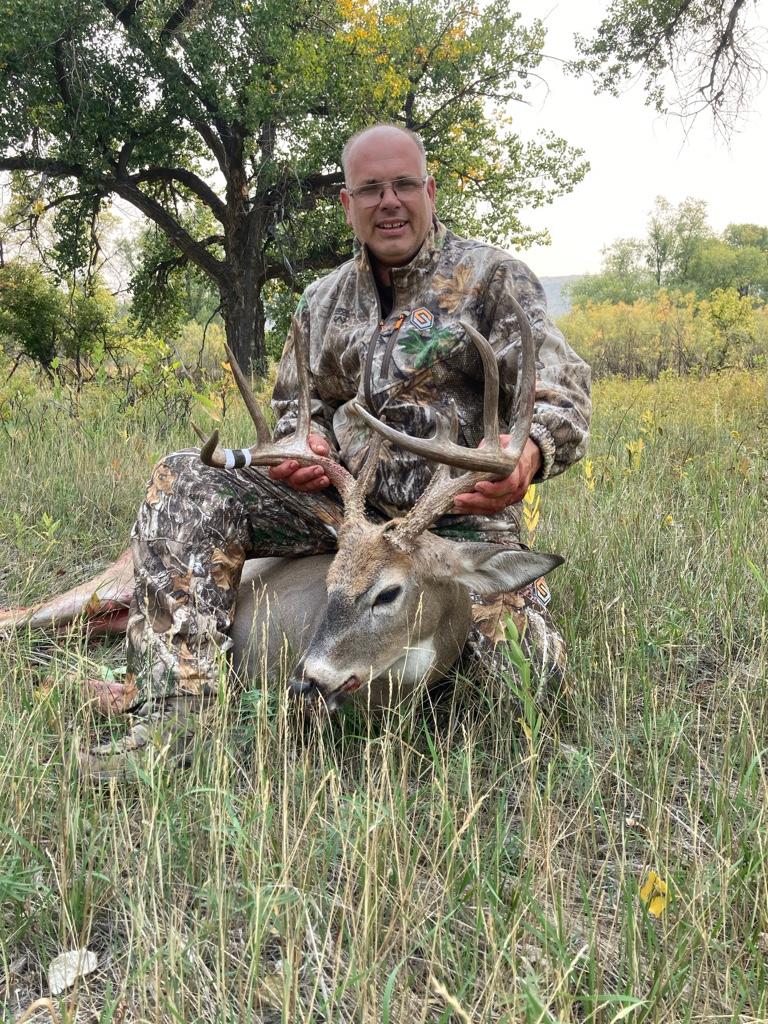 I just wanted to share a picture I received today from a friend of mine that I got to know due to saddle hunting.
This is his first saddle buck and I’m so excited for him.
Seeing pictures like this makes all the time I’ve spent behind a sewing machine making saddles all worth it.

Heck yea. That's a fine buck. Congrats to your friend. 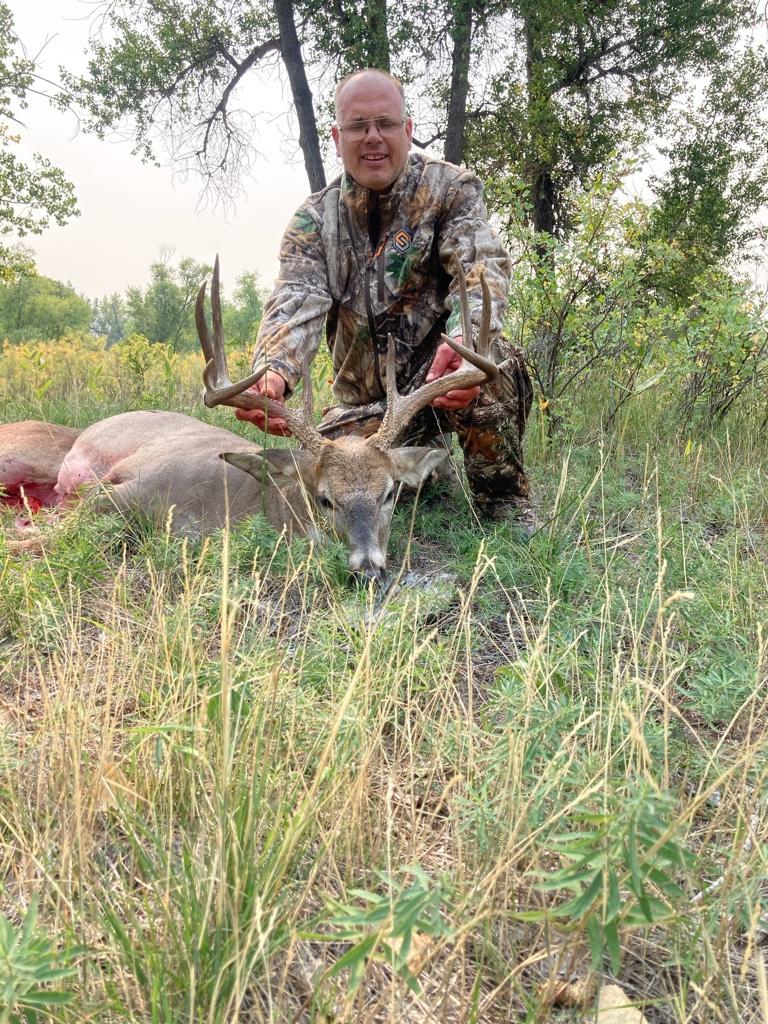 Oh no...that buck needed just one more year!
Just kidding...very nice buck. I'd a shot it.
Can you share the story?

We spoke briefly in text but once he gets time I’m sure he will call and I’ll have more details. 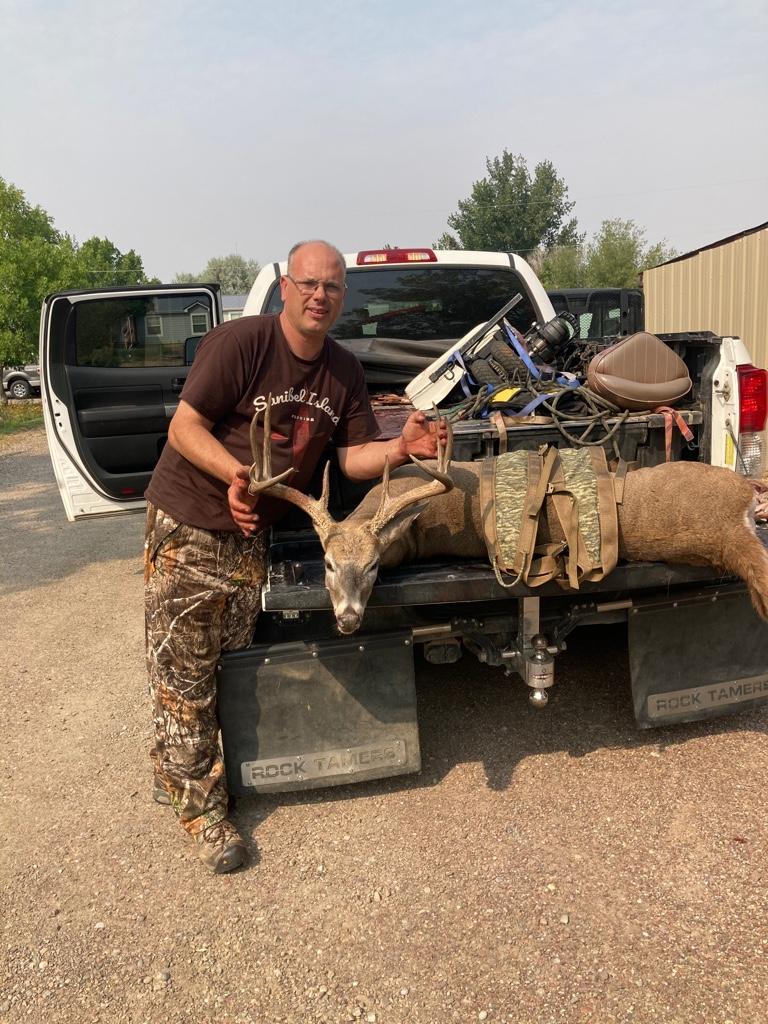 
Sent from my iPhone using Tapatalk
1

Tom, Here's your story. 1st I want to thank Tree Hopper for making a great saddle. He did a great job. Anyway, the tree in background is the tree I killed him out of. That tree is 4' across at it's base and 30" at hunting height. That's common in my woods. Very challenging to get a strap around especially in dark. It's in an ideal location. A travel corridor and bedding area comes from the north east .The field and more bedding comes from the east. Both leading into a major bedding to the southwest. This trees sits at the tip of that major bedding. They come from all 3 directions during the rut. Over the years, it has so far produced 4 good bucks and numerous other close encounters.If you look close there's a smaller tree growing beside it. For years I've hunted out of the smaller tree but it's not ideal for morning hunts. I took two 4000" lb D rings and bolted them into the tree with grade 8 8" 1/2 lags and run my tether through that. I did that with various other trees as well. Now I can hunt out of the big tree, sit on either side of the tree depending on if its morning hunt or PM hunt. So anyway I was glassing the field, and saw a group of bachalor bucks coming out on a point. Last week, 16 bucks came out an hour before dark. Several were shooters and in velvet. I know from experience that the wind was dead wrong for an afternoon hunt at that field location. However I also knew where they were coming from. That major bedding to the southwest! I knew if I hunted that cottonwood in the AM that most likely I would see them and there would be good chance they would be in range. The season opened last week but I could'nt hunt. I knew I had to hunt ASAP because I wanted a crack at a big velvet buck. I glassed Wed. night and most were out of velvet but was still 1 big shooter in velvet and the big one coming out of that point. I got in the tree and hour 1/2 before daylight so I didn't spook them in the field (it's close 100 yds). I figured they would be coming by at 1st light. However these deer see very little pressure so I didn't see a deer for ther 1st hour. At 7:30 i saw my 1st deer.I knew they were coming. Pretty soon I saw the big one scraping front of me at 70 yds. 6 other bucks hit the same scrape. Then could hear deer coming thru the weeds but I couldn't tell what they were or how big due to the foilage on my tree. I could make out a rack but I wasn't sure which one it was. He stepped out and i could se it was the big one. I drew and he stopped to make a rub. I let down and waited. Finally he came thu the Opening. At 2nd glance, I thought he was the big 8 that we been seeing. I was a little indecisive and almost let him pass. The he turned his head and I saw 5 on both sides. For some reason I thought he was the# 2 buck on our hit list but he was shooter at 20 yds saw I drew and grunted. he stopped and I put the arrow through both shoulders. He plowed 30 yds and went down. Back legs were the only thing working. I started to get down then his head went up. I ranged him at 50 yds and took a followup shot. I missed him but he plowed another 15yds into the brushed and I heard him crash. I got got down and headed to the truck. That's part one of the story. The recovery is part 2. More pics as well. It's an interesting story. 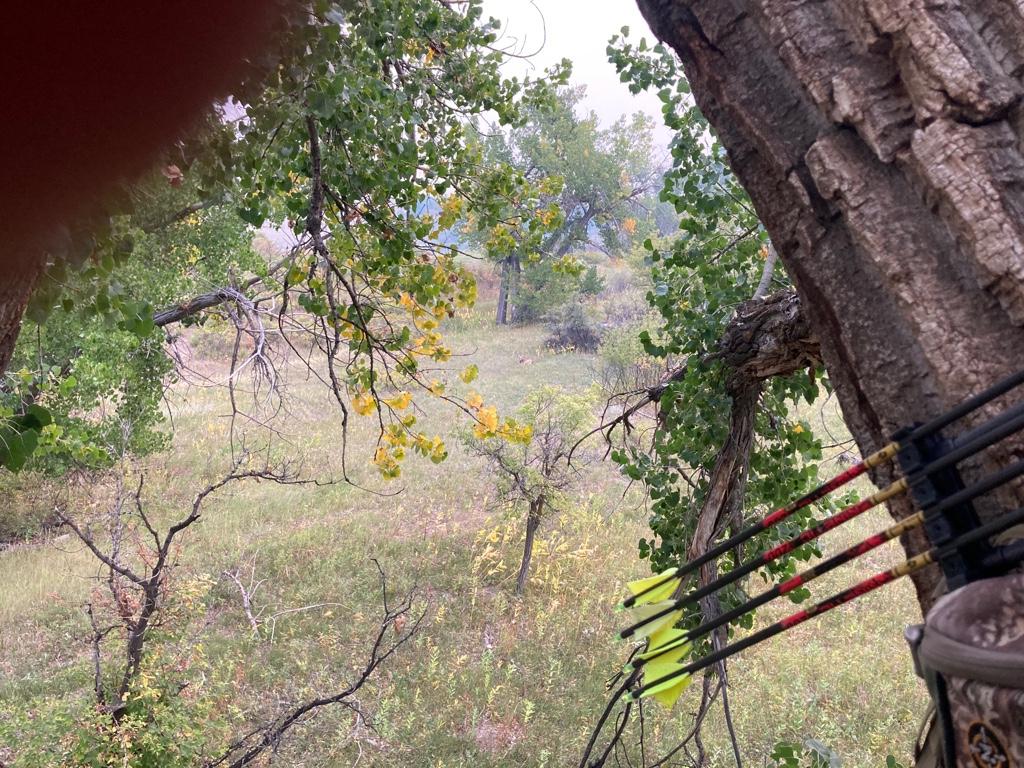 This is a picture just after the shot 50 yards away 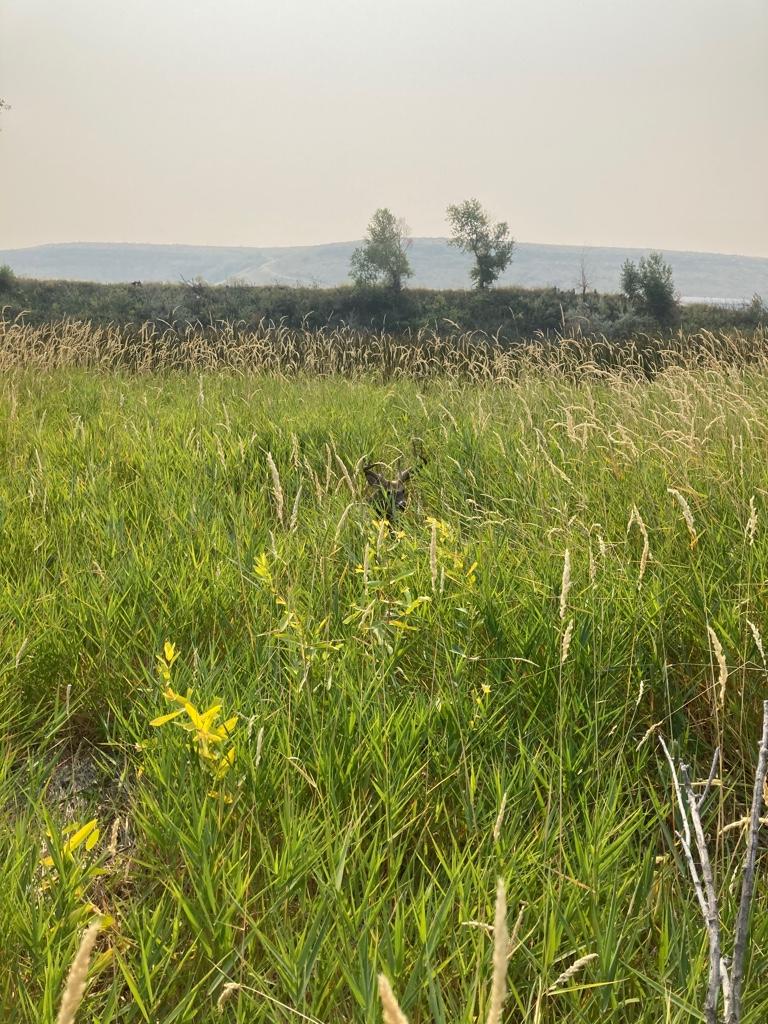 This picture here is 3 hours 15 minutes after the shot through the vitals.

@1simplemann thanks for sharing your hunt
Great buck !!!
1

Part 2 The Recovery. This part of the story is interesting because I've been doing this a long time. 40+ years. I lost track of how many bowkills but it's over 100+. I've NEVER seen a tougher deer with more will to live than this guy. I put an arrow through BOTH shoulders. They were mush. It's been my experience that when you do that, they don't live long or go far. Well he didn't go far that for sure. So after getting down I figured I should give him some time. I went home, made some calls, did some paper work, and ran some important errands. I shot him at 8 AM. I got back to the tree at 11AM. We picked up the trail and there were big puddles of blood every 5 or 10'. I knew he would be close and dead when we got to him. We went about 40 yds and my buddy says there he is. I couldn't see him in the grass but as I walked closer I could see his horns upright. My eyes were telling me he's alive but my mind was telling me he's dead so I walked right to him. He tries to run and goes 5yds. I'm like "Holy Cow" in disbelief. I nock an arrow and try to get close to finish him off. The grass was so tall I couldn't see his body and every time I try to close he would stumble/lunge. So finally he was too tired and he let me get close. I still couldn't see his body so I estimated that he was broadside and guessed where his vitals should be. I shot and completely missed! The grass deflected the arrow. He lunged at the shot. This time I could see a narrow hole through grass to what looked a quartering away shot to the vitals. The arrow hit and he lunged again. I could see that I hit in front of the hams on the left side. That took a lot out of him but he could still lunge. He wouldn't let me right up on top of him to finish him off. I stayed about 8-10' away. The grass was still tall but i found a small hole too shot thru. I took another shot and it deflected and hit his spine. Now he can't get up but still very much alive. I'm still in disbelief considering how much blood he had lost and how much he had been through. I move in and put a finishing arrow quartering away thru the vitals and bury it to the nock. His head was still up so we backed off and gave him time. The truck was close so we walked back and put the bow away and got ready to field dress him,etc. After 15 minutes we walked back to him and his head was down but he was STILL breathing! His head was down this time. I figured it would be any second so we just sat there and waited. Well it took him another 15 minutes before he was finally done. This buck had TWO arrows thru the vitals and 2 damaging but non lethal arrows in him. He was TOUGH! He was alive at least 4 hours after the initial hit. Pure adrenalin was keeping him alive. Hopefully Treehopper can post the pics. BTW Thanks again TreeHopper. Saddle was comfy. However I didn't get to give it a true test because I got to hunt out of it for only 1 1/2 hrs!
1

Treehopper you must have posted the pics while I was typing! Thanks. Can you post the pic of his broken shoulder? 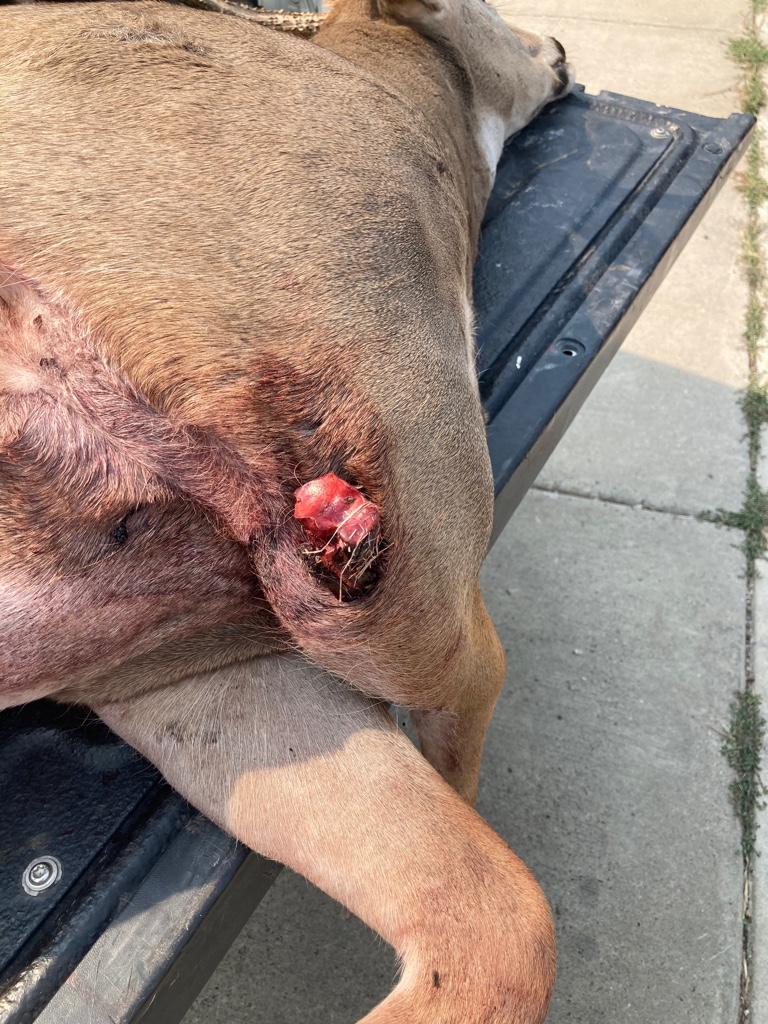 Sent from my iPhone using Tapatalk
1

Thanks TreeHopper. This is the exit hole. The entrance was through the joint to other side. Both shoulders were mush and completely shattered. I came up the front leg and aimed for the Vital V. I was little high but not much. If any one doubts the capabilities of a bone breaking heavy arrow setup, here's proof that it works. My arrow weighs 675 gr. 71lb Bowtech Revolt 29" draw. BH is 175 gr Strickland Helix. Not sure where it is though because he broke the arrow off. This is the 1st time I didn't get a pass thru but it's understandable considering how much bone the arrow went thru.
You must log in or register to reply here.
Share:
Facebook Twitter Reddit Pinterest Tumblr WhatsApp Email Link
Top