A little back story. This will be my 20th season bow hunting and I have always been a pin shooter, both single sliders and multi pin; I've always found myself to be a single pin person and liked the clear sight picture. I won't profess to be a top notch shot, but certainly have the ability to put it in the small dot more often than not.

However, I struggle mightily with ranging, especially when I'm guessing / estimating. I've always ranged the known distances of my surroundings first thing, but that doesn't mean squat when you've got a live animal on the move. To date, I can count 4 deer that I have missed as a direct result of not having the proper range and/or using the wrong pin. So, obviously there's an issue and plenty of room for improvement!

I've recently switched to shooting LH and it seemed like a perfect time to give the EZV sight that I've read so much about on here a shot. It seemed like a great tool to help alleviate my problem. I placed my order with EZV on Saturday, 4/4 and was told it would be delivered on Wednesday, 4/8. I was surprised to see the FedEx truck pull up my drive yesterday. My sight arrived a day early!

I had previously watched all the how-to videos so I immediately opened the package and set to mounting the sight. I was surprised to see a hand written note from Aaron in the bag. That alone impressed me that a business owner took the time to pen a personal note with their product.

Before long I had the sight mounted on my bow. Based on the measurements I took earlier the 260 insert would be close. I popped that in and stepped outside.

I pinned the included target to my bag and stepped to 10 yards. My first arrow was a little right, but about dead on vertically. I moved to 20 yards and a few tweaks here and there and I was drilling the dot. I stepped back to 30 yards (the max my subdivision yard will allow) and it took just a few more small adjustments to drill the dot again. At that point, I was fatigued and didn't want to tinker with it any more. My next task is to step back up to 20 and double check that I have the correct insert.

I am certain that it will take some getting used to shooting the sight as it's much different than anything I've ever used. I can't wait to get on a 3D course and really work with the bracketing of the vitals on a life size target! I am confident that I have enough time to really get comfortable with things prior to September.

A few observations in my first hour with the sight:

Pros
- Overall, the sight was easy to dial in, or at worst no more difficult than any other sight
- Awesome sight picture with zero clutter. A change to not cover up the dot with the pin
- Sight seems well built, and with only a few moving parts it was pretty intuitive
- Using the same allen wrench for all adjustments was HUGE
- Instructions were easy to follow. I recommend watching the tutorials too as that had me immediately on paper, which alleviated a lot of headache up front

Cons
- The only thing I really fussed with was the adjustments. I'm coming from a micro-adjust, so there were a few times where I loosened the bolt too much and really threw off my sight. Not difficult to overcome, just an observation and something I wasn't / am not used to

I'm in the same boat as you with dialing mine in. I too received mine a few days ago and so far I'm liking it. I always used a 5 pin sight so it's very refreshing to see everything clearly including possible branches. I started shooting my 3d target last night and it's very fast and fairly intuitive to frame the vitals and let her fly. Tonight I'll move back to different yardages to verify my insert is the correct speed. I used a chrono after reducing my draw weight so should be money.

I've hunted with pins for 35 yrs aiming for the exit and although I'm quite aware of the vitals location it might take time to learn to frame an area and think of exit. Time will tell but from what I've read it seems to come natural for most. No Cons as of yet

Sent from my SM-G950U1 using Tapatalk

I made it back into the yard in between work tasks today and double checked my 20 yard ticks - they were right on the money. At this point I think 260 is the insert for me and I have no idea when I'll be able to stretch out the distance to confirm, but I'm looking forward to it!
D

I borrowed a left handed one from a buddy and turned it around so I could use it.I just can't see the level.In any event,I put in on and took it off 3 times in the past month.One day it just clicked and I'm digging it now.In fact,I just got mine in the mail today.I don't think it will ever be a long range sight for me but for 45 and under,it's golden.I plan on committing to it for at least the rest of this season but I see it as a winner for now.
M

Got mine yesterday and have probably put 150-200 arrows down range. If I use the supplied vitals target, I’m lethal. If I switch to a deer target, I’m still good left/right, but not quite dialed in on framing the vitals, so my vertical string isn’t perfect.

Here is my last group today at 33 yards (as long as I can shoot from my deck. 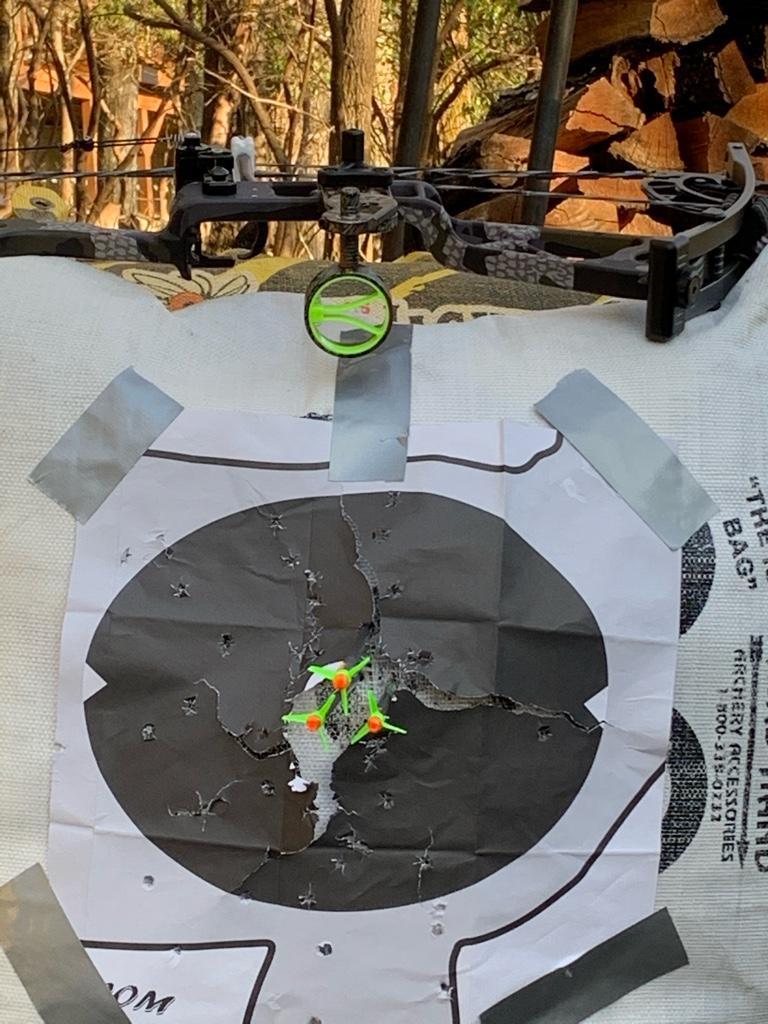 My daughter was also shooting the target. None of my shots were outside the vitals.

One problem I am having is due to my astigmatism. I wish I could mount the site even further from my eyes, but I guess that would mess up the physics of the sight. I had to shoot with my non-dominant (left eye) closed for the first 100 or so shots, but I think I will possibly be able to get back to both eyes open with some more training.

Overall, I’m really impressed with the product. So much so that I’m listing my Garmin A1i in the classifieds.

Nice slinging mtsrunner! Your vertical will surely come with time

. Just wait until you slip one through the cage of that deer you’ve been chasing ....the EZV makes it so much more simplistic. No rangefinder, no pins to cover what you’re trying to hit etc....frame and claim

. Just wait until you slip one through the cage of that deer you’ve been chasing ....the EZV makes it so much more simplistic. No rangefinder, no pins to cover what you’re trying to hit etc....frame and claim


Sent from my iPhone using Tapatalk
Click to expand...

Bought a 3D deer target today. I’m only thinking/visualizing vitals. Shot all angles from unknown distances for about an hour. I love this sight.
First 10 shots in picture. 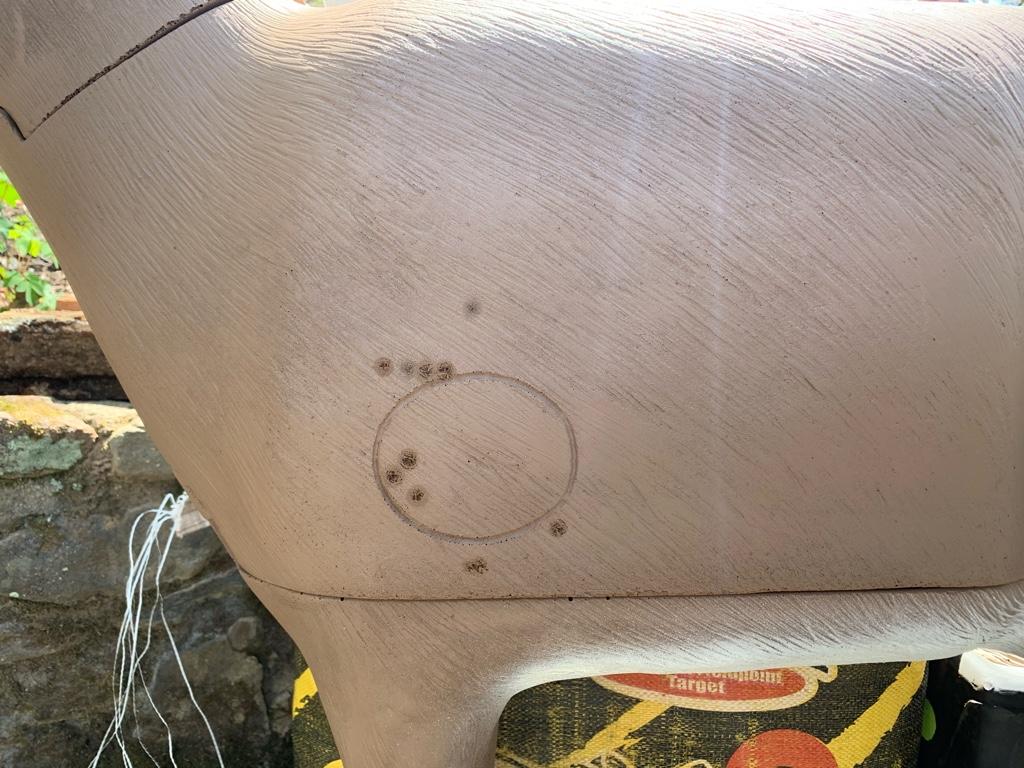 mtsrunner said:
Bought a 3D deer target today. I’m only thinking/visualizing vitals. Shot all angles from unknown distances for about an hour. I love this sight.
First 10 shots in picture.

So no problems on quartering shots? Still able to frame up the vitals and put it in the right place? That’s really the only thing I wonder about with this sight. That and the deer here are the size of large dogs... or smaller.
M

Tr33_n1nj@ said:
So no problems on quartering shots? Still able to frame up the vitals and put it in the right place? That’s really the only thing I wonder about with this sight. That and the deer here are the size of large dogs... or smaller.
Click to expand...

Quartering shots are pretty easy, in my opinion.
Here is a hard quartering entrance and exit pics. 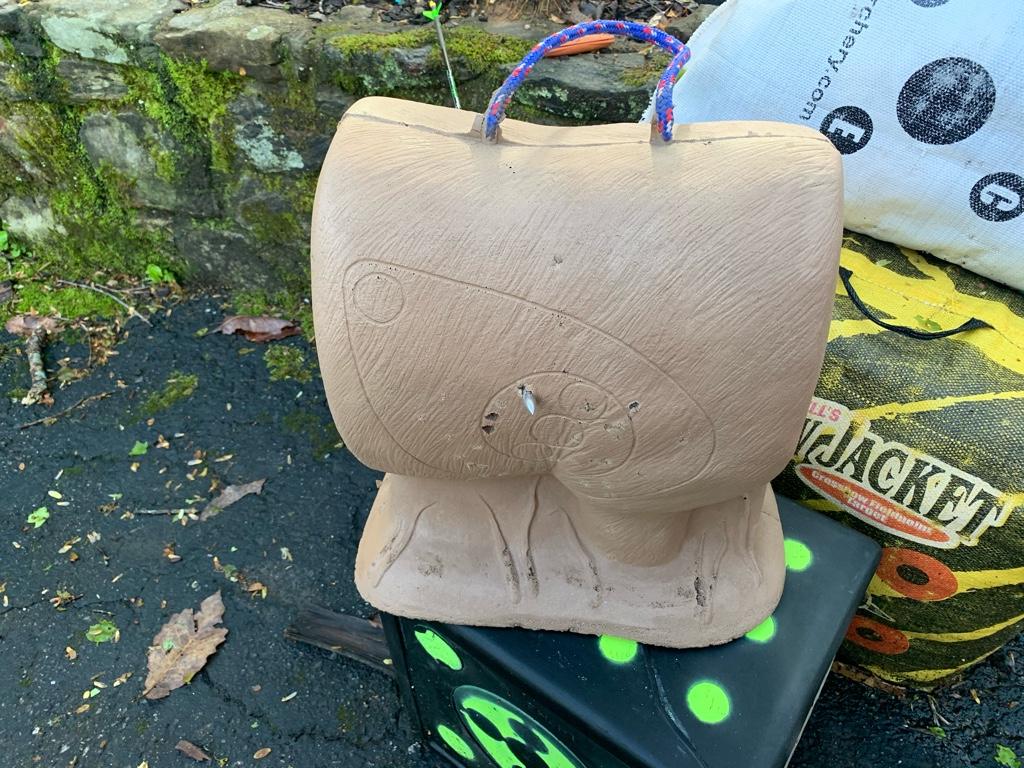 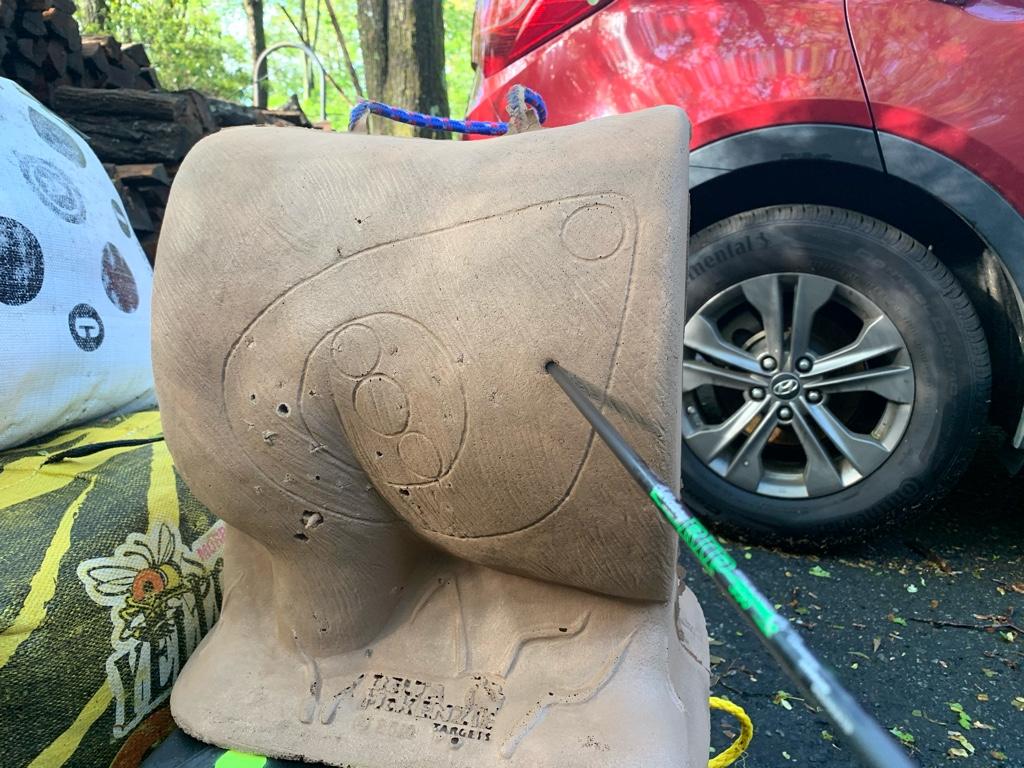 What target is that @mtsrunner? I need something like that. My bag has a vital side but I want something that doesn’t have a color distinguished target area.
M

MN_Bowhunter4 said:
What target is that @mtsrunner? I need something like that. My bag has a vital side but I want something that doesn’t have a color distinguished target area.
Click to expand...

It’s the Delta McKenzie Kill Zone.
I did a write up on it recently found here:

So, I have jumped on the EZ V bandwagon. It hasn’t been perfect, but I think the benefits outweigh the challenges. It’s well documented that it really helps to practice with a 3D Target to get the most out of the EZ V. I am using a DM Hoosier Daddy for most of my practice, but wanted something...
r.tapatalk.com

Just like you said, it is good for the EZ V because it doesn’t have super exaggerated vital area that would let your brain cheat while practicing. It has really helped me train myself to frame a 13” horizontal zone. I can also tell from long distance if I have hit right or left because it is kind of light. It will spin a little bit on off center hits. Mine has probably taken 1000-1500 shots and is starting to wear out in the middle, but I’m still happy with it and just ordered another.

I'm under the impression that you probably won't be able to get tight groupings at longer distances with the EZ V like you would with pins? I understand it's designed for hunting and not target shooting. I'm intrigued but not sure about dropping $150 on it. Maybe keep an eye out for one in the classifieds.

I just set mine up today. I wanted to try something different that just the standard 3-4 pin set ups. I find I shoot better with both eyes open it helps me to focus on the impact of the arrow and watch what the deer does. So far so good in the basement at 16 yds. It was a little windy out today and I didn't want to try to be setting it up in the wind. I think it will help in those situations when a buck is moving or catches you off guard and you unsure of the yardage, just bracket the vitals and kill it. So far I like it, I can't wait to try and kill a deer with it until then I guess I had better order a 3-D target to practice with.
You must log in or register to reply here.
Share:
Facebook Twitter Reddit Pinterest Tumblr WhatsApp Email Link
Top