How many camp instead of paying for cabin or hotel.

You guys know they make giant wet wipes and stoves to heat water to wipe your ass right?

Used a cabin once, but after that we always tent camped,

For years, our moose hunt camp was at one of the founding member's cottage. Hot showers, full kitchen, TV, even a pool table at one point. But a few years back he sold the place, so we started renting a small island with a cabin and shed on it. The cabin is tiny, so we let the really old guys (as opposed to the slightly old guys like me ) sleep in there. Basically it only sleeps 2, 3 if someone wants to use the small couch, but it's tight.

So some of us set up tents. For last year I picked up a Cabelas Instinct 4-season guide tent and some Disc-O-Bed stacking/bunkbed cots to save on floor space. I think my kid and I were more comfortable in the tent than the guys in the cabin or shed! Had a Mr Heater propane heater, but it never got cold enough to need it. Can't use a camper, since the island is water access only, so we just hauled in all our gear in boats, though we did rent a big pontoon boat from the marina to bring the bulk of the stuff in with one trip.

Prior to the moose hunt, a buddy and I went into our hunting area (Crown Land) to do some scouting, archery hunting (deer/bear) and test out the new camp gear. The heavens opened up every night and poured, but we were nice and dry in the tent and slept very comfortably on the cots. Used my ATV and a small trailer to haul in the 10km or so into the bush on logging trails to the core of our hunting area, so we didn't pack in. The tent and cots would be way to heavy to try and pack in anyway. We had an absolute blast....so this year, I'm planning to go and camp there again for the whole moose archery week, which is a few weeks before the gun hunt. Will have my new saddle setup with me this year too.

Here is a pic of the tent/cots:

Really comfortable and spacious for two hunters with all the gear because of the bunk bed system.

Here is a pic of how we hauled in:

And the view across the beaver pond on the far side of the campsite:

Cost? Not including the gear and a bit 'o gas for the ATV, there was no cost for the camping since it was Crown Land way back in the bush up north.

Can't wait...really looking forward to a back country camping hunt trip this year, even if it's not a "pack in" trip.

barlow96 said:
We have been going out of state hunts for the last 3 years. We have always paid for cabins or got a hotel. I bought a nice tent last year. And stayed a couple days in it last season. Thinking of doing it from now on. The tent is a kodiak canvas flexbow. Looking at getting a shower system and a generator and I think I will he set. I don’t think it will be roughing it to much really.
Click to expand...

We camp a lot. Made a shower from a two gallon lawn pump sprayer. Its awesome, almost as nice as home. Put 6' of plastic hose on it w/a kitchen faucet sprayer on the end. Heat water and enjoy. The first time I hunted the west I took a black sun heated shower bag. They are worthless. By the time you come in for the eve its already cold.

I have never rented a place, but I camped all sorts of ways.

I got an upgrade as a gift this year. My brother got an old camper as a hand-me-down from our father… so he handed down his rooftop tent to me. I don’t quite know how I will handle sleeping on a 6” foam mattress for a change. Might be hard to get me out of bed when the alarm goes off….

I am planning on having a “diesel parking heater” setup to heat it before next season, too. Since they are only like $200 to get a setup, i figure a heated tent setup is worth 2 nights worth of hotel cost… 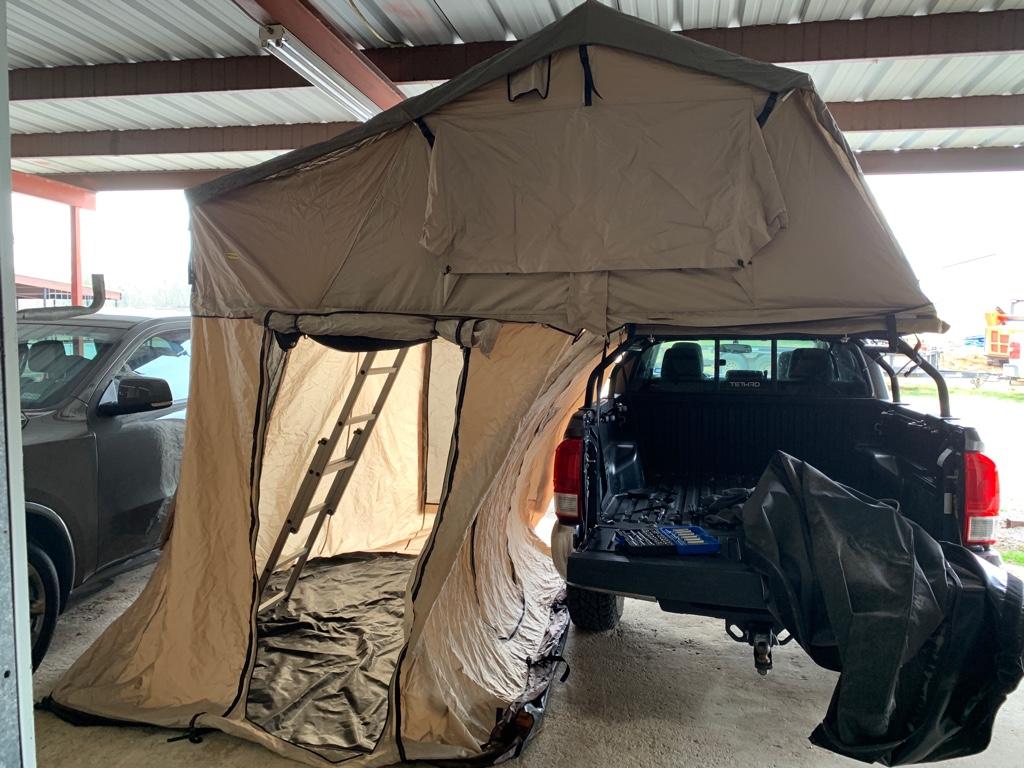 Photos aren’t wanting to post on tapatalk, let me try this…

This November, my cousin and I went for 3 days/2 nights to track whitetails in ADK. I removed the bench seat in my CR-V and we threw down foam camping rolls and sleeping bags. It was cramped, but we made it work since we used his pickup and tailgate for cooking and storage. His capped truck bed would have been roomier, but the advantage in my Honda was we could start the engine, crank the heat and get the cabin roasting before going to sleep. Nevertheless, it sure felt cold waking up to 18° the one morning.

KYHunter said:
LBL is pretty tough hunting but low bow pressure. Other public land in KY may be better worth your time
Click to expand...

I can agree that LBL is tough hunting. I have been hunting it since 85. Not many deer there anymore. Totally mismanaged. You wont see me there in March scouting, LOL.

GeoFish said:
I can agree that LBL is tough hunting. I have been hunting it since 85. Not many deer there anymore. Totally mismanaged. You wont see me there in March scouting, LOL.
Click to expand...

many a sit with no deer lol

I've been tent camping for years for trips. I started with a big tent from walmart. Upgraded to a hammock and rain fly for short trips. Then I got a backpacking tent from mountain smith. Then I built a micro camper for a nice base camp. Now I just use a roof top tent on my truck most times. For convenience its hard to beat the micro camper. Definitely warmer in there too. Close second is the RTT but it certainly can be a PITA to put away at 430 in the morning when its cold and I need to hurry to poo before I get to the tree. A lot of times I'll use it when I plan to hike or kayak straight in.
B

I started tent camping for hunting public lands a couple years ago with a few guys from work. We try to make at least two trips. When we started I never tent camped before. I really liked it. Now tr to get the rest of the family involve. Going to try to get them out camping in the spring. 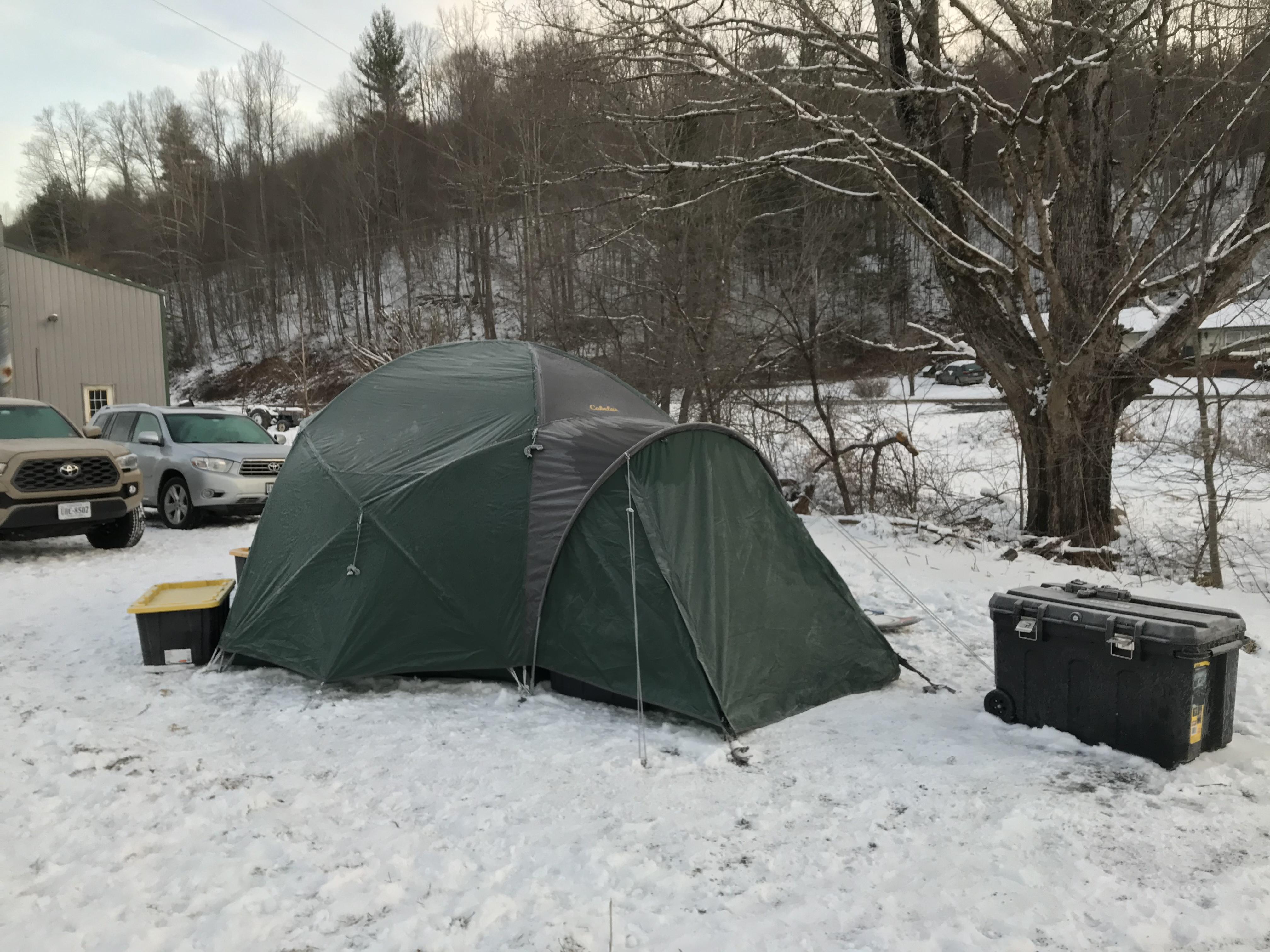 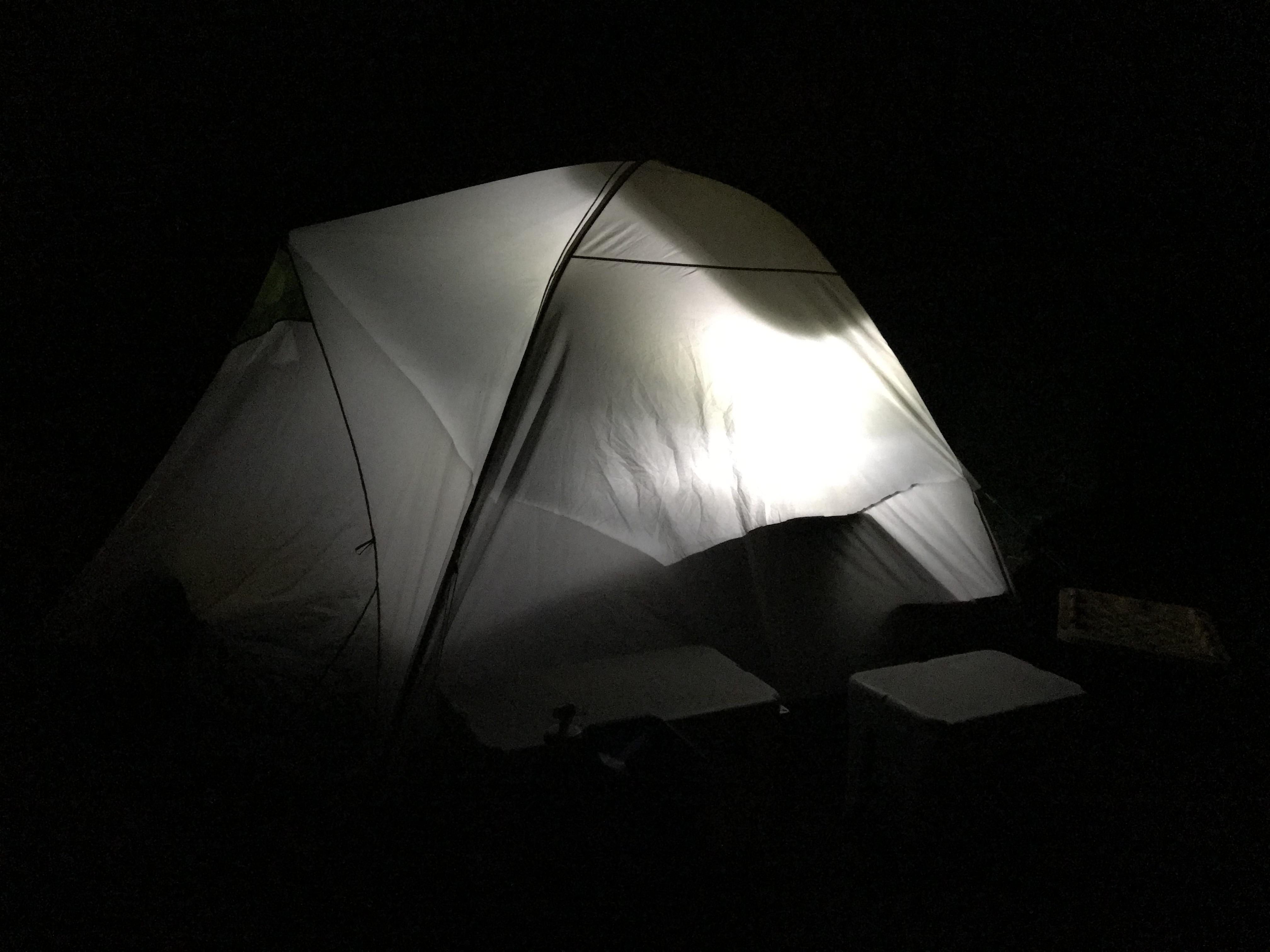 barlow96 said:
We have been going out of state hunts for the last 3 years. We have always paid for cabins or got a hotel. I bought a nice tent last year. And stayed a couple days in it last season. Thinking of doing it from now on. The tent is a kodiak canvas flexbow. Looking at getting a shower system and a generator and I think I will he set. I don’t think it will be roughing it to much really.
Click to expand...

A shower is the one thing I really wish I had in camp. I bought a portable shower from REI last year. Doesn’t work well.

Here’s a camping tip if you can get away with it.

If you have an anytime fitness nearby, they do week long passes. If you need a shower and you’re out of town. Or state. It’s a solid move.

Hey weekender how is that tent?

MJH said:
Hey weekender how is that tent?
Click to expand...

Pain to setup solo but once up she’s bomb proof. This is a Cabelas Alaskan guide and comes with fiberglass poles. I think they still have an aluminum pole option under a different name. If you’re putting up by yourself I recommend the aluminum pole model.

I only use this tent in high wind or once it gets below 40F at night.

Love camping too. I just ordered new tent for this season on everest. Since I joined caliber membership I have free shipping and huge discounts. So convy. Now I'm a regular buyer at this store. There are all gear for different outdoor activities.
Last edited: Mar 18, 2022
You must log in or register to reply here.
Share:
Facebook Twitter Reddit Pinterest Tumblr WhatsApp Email Link
Top